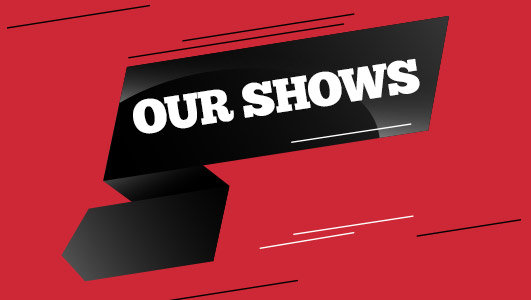 While the majority of us are just starting our day, The NOVOS are well into their 3rd cup of coffee. Hitting the air from 6am, Matty, Meg and Krivo appreciate everything the Novocastrian lifestyle has to offer!

And don’t forget ‘The Show Before The Show’ with Producer Jackson from 5:30am.

Three of Australia’s most respected personalities come together for the drive home from 5pm. Kate Ritchie, Tim Blackwell and Joel Creasey bring a conversational cheekiness to NEWFM.

Mixing the day’s hot topics with the best of the web, Kate, Tim & Joel engage their audience by letting them join their ‘club.’ It’s not an exclusive club, with more than 1.5 million listeners every single week!

Kyle & Jackie O’s Hour of Power can be heard from 7pm weeknights on Newcastle’s 105.3 NEWFM … oh and expect the unexpected.

Jackson is a born and bred Novocastrian. Throughout his school years, his teachers often said that he talked too much in class, and he promised them he would one day turn that into a career. He went on to study a Bachelor of Communication at the University of Newcastle, where he graduated in 2015 and went on to nab his dream job at NEWFM.

Outside of work Jackson continues to pursue his passions in photography and you can find him most mornings snapping the sunrise on Merewether Beach. When he is not bringing you Newcastle’s Best Music or behind the lens you can find him live-tweeting episodes of The Real Housewives (a New Jersey fan, but not picky!)

Jackson kick starts your Workday with 105 Minutes of Commercial Free Music from 9am!

Big Bad Brad was born in Newcastle and grew up in Bellbird (where Dad is the local fruito) but eventually swapped the bush for the beach full time.

No stranger to Newcastle radio, he’s been on air in Newy since 2007, and these days calls NEW FM home!

A huge Mixed Martial Arts fan (he’s been to 20 live UFC events including 2 in Las Vegas!), a massive 80’s & 90’s WWF wrestling nerd and his mission in life … to get sponsored by a brewery. Brad think’s Beer Ambassador has a nice ring to it!

When he’s not on the air you can usually find him at the pub with the boys, at the beach with the missus, or asleep. In fact, check there first.

Catch Brad on NEWFM Monday to Thursday nights with more of Newcastle’s Best Music, and the Greatest Love Songs of all time with Love Songs from 9pm. Make a dedication now

3 words that sum me up are radio; birds and shoes! I’ve been radio obsessed ever since I was a kid, growing up listening to radio and just wishing to get inside those studios.

Well, after a little study and some possible nagging the right people, I got that wish! I’ve been on air in Newy since 2015, and stoked to be on a station that LOVES Newcastle just as much as I do.

Outside the studios (and sometimes between songs when I should be working), you’ll find me daydreaming over my other loves: my beautiful cockatiels and lorikeet and my ever growing shoe collection.

Mel ‘Sarge’ Sargeant is a Mum of two little girls Summer and Lilly. She loves Newcastle and working at NEW FM. She’s been in radio for ten years working Australia wide but she loves Newcastle so much she chose to stop here. She also heads up NHM-I Got It From My Mumma Podcast with Bec Tansey and NHM Newcastle Hunter Mummas Mum’s lifestyle website.

Born and Bred in Sydney and after spending time in regional NSW in Parkes & Tamworth JT has called the Hunter home for the past 4 years and loves all it has to offer.

When JT’s not on air he can be found spending time with his 4 kids, binge-watching Criminal Minds, Supporting the Mighty Parramatta Eels … or hiding out somewhere spooning a Jar of Nutella (Yes, we know it’s bad).

JT play’s Newcastle’s Best Music on The Weekend and occasionally filling in across the Workday.

Always in the mood to laugh, Emm is a bright ray of sunshine on a dreary day. Her happy and vibrant personality bounces from the airways. When she has a set of headphones and a microphone in front of her she is always ready for a chat and fun times.

Media has always been her passion and after completing studies in Melbourne she joined the NEWFM Network for breakfast radio in Tamworth on FM92.9 where she quickly became a local and supported many charities and organisations. Her desire to be closer to family moved her to the Gold Coast where she continued breakfast radio.

Always up for a challenge and new opportunities her career path took her a new direction and now she is able to combine her love of travel with teaching. Emm loves family, friends, fitness, and fun. Catch her loveable laugh on weekends!

Hey I’m Ryan! I’m originally from good ol’ Sydney where I studied how to sleep in, watch Netflix and open Microsoft Word every now and again, or as its formally known: a Media degree. My parents always said that I had a face for radio and the ability to talk the leg off a chair so I thought I’d give community radio a spin! Many chair legs later – I was lucky enough to score the opportunity to bring you Newcastle’s Best Music on NEWFM! I love Newcastle! If I’m not on-air, I’m most likely checking out the beaches, exploring the city or drinking strawberry milk somewhere.

Every week Kian hosts the iHeartRadio Countdown with the world’s biggest stars guest hosting, like the Jonas Brothers, Troye Sivan, Sam Smith and more! Join the countdown for the week’s 20 hottest songs.

Tune in to the iHeartRadio Countdown from 7pm Sundays.

Brandon was born in Sydney, and raised in Sydney, Cairns (very briefly; the weather was too hot!) and the Central Coast.

His report cards from school tended to say “he talks too much in class”; so, since he graduated from school in 2014, he decided to make talking a profession. His radio career has seen him have his own radio show in Gosford and produce some of Sydney’s biggest radio shows. Along the way, he also picked up a Journalism degree.

When not behind the microphone, Brandon enjoys long road trips with his girlfriend, eating pepperoni pizza and attending to his chickens.

Kelly Glover is a native Novocastrian who has racked up 20 years in media.

She’s interviewed celebrities on the red carpet in Hollywood, worked as a tour guide across Europe, and went viral with her dating after weight loss article.

Kelly started at NEW FM in 2010 hosting the Love Song Dedication show and is happy to be back home.

When she’s not playing Newcastle’s Best Music, Kelly makes the most of our spectacular lifestyle and loves time at the beach and lake.