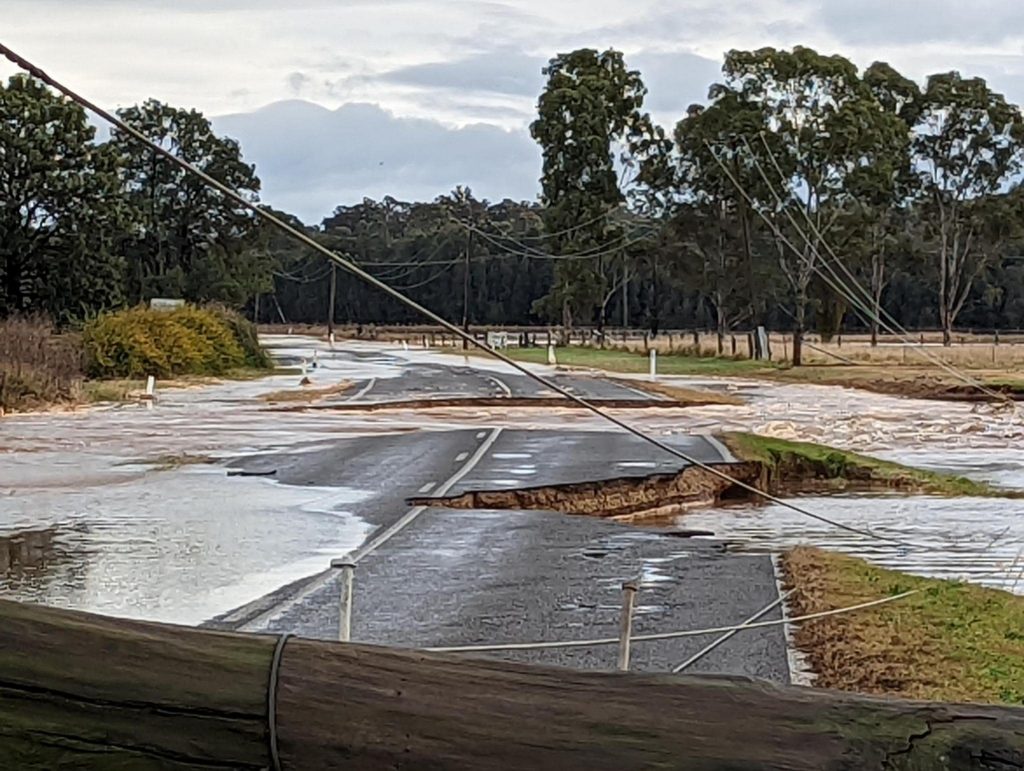 The Lower Hunter River at Maitland (Belmore Bridge) was last recorded to have hit 10.36 metres and rising. The river level may peak near 10.70 metres Friday morning, with major flooding.

The Hunter River at Singleton was last recorded at 12.90 metres and falling but still major flooding.

The latest from the NSW SES (updated 7:45am Friday 8th July):

Evacuation Warning is in place for Millers Forest and Duckenfield.

• Morpeth, Millers Forrest, Dukenfield, low-lying areas in Woodberry, Berry Park
• Melville Ford Bridge at Aberglasslyn may still be closed
• Oakhampton Heights may remain isolated due to buildup of localized water
• Windermere Road at Windermere may be cut just past Windermere House
• Maitland vale road at Lambs Valley may still be closed – 400m east of Luskintyre road alternateroute via Maitland Vale Road to Bolwarra
• Maitland Vale road may still be closed at Rosebrook near the RFS station
• Anambah road at Anambah may still be cut 2.5km from the New England
• Brush Farm Road and Pitnacree Road, Pitnacree (East Maitland) may be closed with low lying farmland likely to become inundated.
• Oakhampton No 1 and No 2 Spillways are likely to spill with low lying rural properties around Lorn, Bolwarra and Oakhampton areas inundated.
• Belmore Road / Paterson Road is likely to be closed due to floodwater.
• Possible Isolation of homes in Pitnacree Road, Fosters Lane, Duncan Lane, and Elizabeth Street East Maitland
• Inundation starts over the Louth Park farmlands outside the levee and join water from back water flooding Wallis Creek
• The low part of Cessnock Road near the Maitland Station roundabout may close
• Start of overtopping of Oakhampton Spillway number 2, this may lead to the closure of the New England Highway in the low part between the Trzecinski Bridge and the Maitland Railway roundabout

An Evacuation Order is current.

NSW SES may still be directing people along the Wollombi Brook within the townships of Bulga and Broke to evacuate the high danger area.

• Flooding may still be in all Low-lying road crossing from Bulga to Wollombi and surrounding areas
• Low properties on Paynes Crossing Road, Wollombi may still be experiencing high flood water

An Evacuation Order is current.

NSW SES may still be directing people along the Wollombi Brook within the townships of Bulga and Broke to evacuate the high danger area.

The Wollombi Brook at Bulga peaked at 9.11 metres around 04:00 pm Wednesday 06 July and is currently at 7.77 metres and falling, with major flooding. The Wollombi Brook at Bulga may remain above the major flood level (4.60 m) until Sunday morning.
• Windsor-Singleton road (Putty Road) near Bulga Public School may still be closed due to flood water
• River may have broken banks in a several of locations causing flooding of rural areas