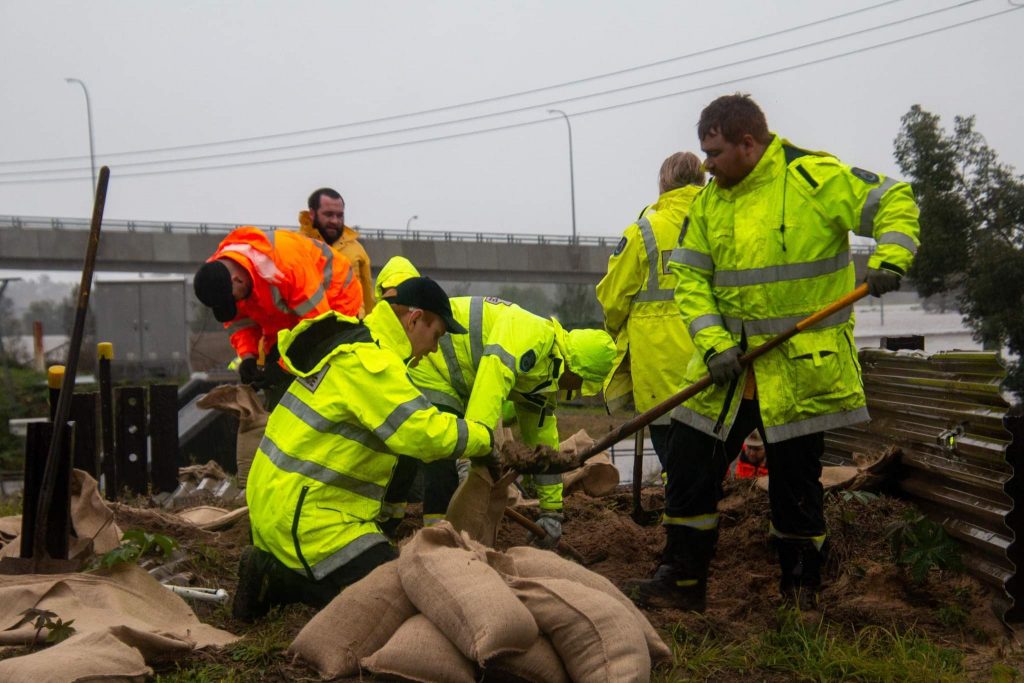 The heaviest rainfall has cleared the Hunter Catchment, however further rainfall is forecast for the next 6-12 hours, which may cause further river level rises and prolonged flooding.

Major flooding is occurring at Singleton after the Lower Hunter River peaked at 13.71 metres early this morning.

Major flooding is possible along the Hunter River at Maitland overnight and into tomorrow, there’s moderate flooding at the moment.

The latest from the NSW State Emergency Service (SES) as at 10am Thursday 7th July:

NSW SES is advising residents and businesses along the Hunter River in the following areas, to prepare to move to higher ground now:
– Millers Forest
– Duckenfield
– Singleton Township
Why should I move:
The heaviest rainfall has cleared the Hunter Catchment, however further rainfall is forecast for the remainder of Wednesday, which may cause further river level rises and prolonged flooding
What should you do:
Go to an upper story building with access to upper levels, or higher natural ground such as a hill. Move as high above ground as possible.
Storm and flood impact may interrupt essential services such as electricity, phones, internet, water and sewerage.
Where to go if evacuation is required:
Prepare to stay with family, friends or at accommodation outside of the flood area, where possible.
Simple things you can do now:
– Take pets, essential items, warm clothes, medicines, insurance documents and valuables with you.
– Relocate other personal possessions to a safer/higher place.
– Keep moving to stay above the rising water level.
– Do not start driving in affected areas during flash flooding. If you are already driving, avoid flooded roads and find the highest nearby place to stop. Flash flooding can cause cars to stall, fill with water, or be swept away.
– Do not enter floodwater as there is a high risk you may be swept away. Consider alternative ways to evacuate if possible.
– Prepare to take drinking water and food due to possible long travel times.
– Share this information with family, friends and neighbours and help others where possible.
– For the latest information listen to your local ABC radio station,
– Follow us on Facebook at /NSWSES or our website at www.ses.nsw.gov.au
– Latest Weather, Warnings, Rainfall and River heights: www.bom.gov.au/nsw/
– Road Closures: www.livetraffic.com.au or http://www.myroadinfo.com.au
HINTON ISOLATED
Rising flood waters from the Hunter River and Paterson River have resulted in Hinton being isolated from the surrounding areas.
The Port Stephens SES Unit has pre-positioned a rescue vehicle, a boat and crew members in the Hinton area to assist the community. NSW SES Rescue Operators at Hinton have established protocols with NSW Ambulance in the event that any medical evacuations from Hinton are required.
In the event of any life threatening or medical emergencies, please call 000 immediately.
Assistance from the NSW SES can be obtained by calling 132 500 or speaking to any of the NSW SES members in Hinton.

Significant river level rises have been observed along Wollombi Brook. At Wollombi the river peaked with major flooding above the March 2022 flood. Moderate flooding is now occurring. At Bulga major flooding is occurring well above March 2022 flood levels where a peak of 9.11 metres was recorded on Wednesday afternoon. This is the highest recorded level since 1952. The peak at Bulga is 1.0 metre higher than the 1952 flood level.

The Wollombi Brook at Wollombi peaked at 14.20 metres around 01:00 am Wednesday 06 July, with major flooding. The river level is currently at 10.98 metres and falling, with moderate flooding.

An Evacuation Order is current for;
• Wollombi
• Congewai
• Paynes Crossing
• Laguna
• Bucketty
• Ellalong
• Millfield
• NSW SES are continuing to direct people along the Wollombi Brook within the townships of Bulga and Broke to evacuate the high danger area
• Flooding remains in all Low-lying road crossing from Bulga to Wollombi and surrounding areas
• Low properties on Paynes Crossing Road, Wollombi may still be experiencing high flood water

At Bulga: (Bulga Bridge Gauge)
The Wollombi Brook at Bulga peaked at 9.11 metres around 04:00 pm Wednesday 06 July and is currently at 8.69 metres and slowly falling, with major flooding

• An Evacuation Order is current. NSW SES are directing people along the Wollombi Brook within the townships of Bulga and Broke to evacuate the high danger area
• Waters may have closed the Windsor-Singleton road (Putty Road) near Bulga Public School.
• River may have broken banks in a several of locations causing flooding rural areas

Moderate flooding and renewed rises are occurring at Maitland.

Minor flooding is occurring along the Hunter River at Raymond Terrace.

The Hunter River at Singleton peaked at 13.71 metres around 03:00 am Thursday 07 July and is currently at 13.69 metres and falling, with major flooding.Rural low-lying areas in and around Glennriding, Dunolly, may now be impacted by flood waters.

• Combo and Whittingham is impacted by flood waters
• Low-Lying areas of East Singleton and Whittingham is impacted by road closures.
• Bridgeman Road Singleton is closed 500m north of the New England Highway intersection
• All Riverside Park access is closed
• River at Scotts Flat area leading to the isolation of properties has breached its banks
• Properties in Doughboys Hollow and Whittingham may now be impacted by flood water
• Glendon cut off from direct access to Singleton; alternative route may be open via Sedgefield and Roughit Lane
• A number of key local roads will be closed
• Extensive flooding of low-lying farmland around Singleton will be evident
• New England Highway may now be closed between Bridgman Road and White Avenue

People in areas likely to be impacted by flooding in Maitland should prepare for potential isolation.

People in areas likely to be impacted by flooding in Raymond Terrace should prepare for potential isolation.

Moderate to heavy rainfall has been observed in the Paterson and Williams Catchment since Tuesday resulting in renewed river level rises.

Minor flooding is occurring along the Gostwyck, Dungog and Mill Dam Falls.

What you need to do:
People in areas likely to be impacted by flooding should consider:
• Refraining from driving or walking through flood water
• Road closures and flood isolation may impact on work, family and educational commitments
• Monitoring emergency warnings and severe weather updates on local ABC radio, NSW SES Facebook Page and Bureau of Meteorology website
• If your property is at risk of inundation, please raise moveable items, such as furniture, as high as possible onto benches or tables, placing electrical items on top
• If you are advised by an emergency services officer to evacuate, please do so
• Securing outside belongings and before leaving; turn off the power, water and take essential medicines and clothes with you
• Farmers should move machinery, livestock, pumps and fodder to flood free ground