Police are trying to track down two people in relation to an assault at a fast-food joint in Singleton earlier this year.

Around 8.30pm on Saturday 12th March, a 48-year-old man was repeatedly punched in the head when a fight broke out at a KFC restaurant.

He sustained minor injuries, but was not taken to hospital.

Hunter Valley Police District have now released CCTV images of a man and a woman they believe can assist with their ongoing inquiries. 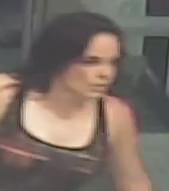