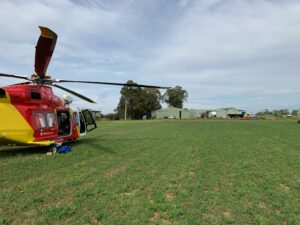 A woman is being treated for facial burns after a nasty accident at a Morpeth property on Wednesday morning.

The Westpac Rescue Chopper was called to the scene around 8:15am and arrived to find the 48-year-old had been burned when an accelerant was thrown onto an open fire.

The woman was treated on scene before being airlifted to the John Hunter Hospital in a serious but stable condition for further treatment.