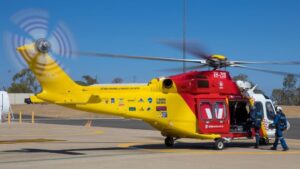 A woman was injured over the weekend in an accident on a property near Cessnock.

Emergency services were called to a property at Wollombi on Saturday evening after a woman sustained injuries in an accident involving an all terrain vehicle.

The 37-year-old woman had lower leg injuries – the Westpac Rescue Helicopter was called to the scene at about 7pm to airlift the woman to hospital.

She was airlifted in a stable condition after being treated at the scene.