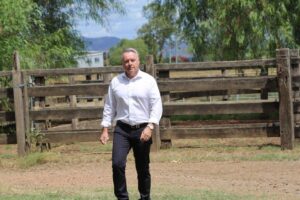 Hunter MP Joel Fizgibbon has confirmed he will be retiring from politics.

He’s held the seat of Hunter since 1996 and after months of speculation will not be contesting the Federal election.

Joel Fitzgibbon has told the NewFM newsroom, now is the time.

“Now I did change my mind a couple of times along the way as I fought to bring the Australian Labor Party back to the centre ground, but I think I can depart now confident that Labor is better positioned to win an election under Anthony Albanese and quite confident Labor is capable of holding the seat of Hunter,” he said.

On whether or not he thought he might lose the election, he said that isn’t even a thought in his mind.

“No not at all, never any complacency on part. People forget that I have been down around the 3 per cent territory previously, indeed in 2013 and bounced back. I think I demonstrated that I learnt the lessons of 2019 and demonstrated to my electorate that I was committed to it and its mining workforce so I think I can be very confident they would have supported me at my tenth election,” said Joel Fitzgibbon.

“I’m 59, almost 60, I think its time to give someone else a go and find out what’s next for Joel Fitzgibbon.”

He reiterated that he is confident Labor can hold the seat.

“Far too early for that speculation, lets get the announcement done first but we have a number of enormously talented people in the local branches here in the Hunter electorate so we will let that play out over the coming weeks,”

“I think the Labor brand has improved markedly since the 2019 election, I think the Labor party did lose its way, it went too far to the progressive left, it lost its focus on many who form our traditional base, it seemed to forget about what drives our economy and that is the resources sector.”

“I think Labor will do well, I expect it to do well if it focuses on the things that really matter to the people,” he said.