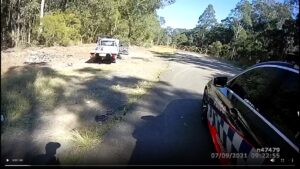 An unlicenced driver has been caught behind the wheel for the third time in as many months.

At about 9am on Tuesday Newcastle City Police were speaking with a motorist while doing their routine traffic stop at Black Hill on the M1 Pacific Motorway near Lenaghans Drive and saw a ute parked on a closed road that adjoins the motorway.

The closed road is known to police for illegal dumping of waste.

Police spoke to the driver of the ute whose P1 Provisional licence had expired in 2017 and was the same person who had been detected by police for other traffic related offences.

He was arrested and charged, released on strict conditional bail and faces court in November.