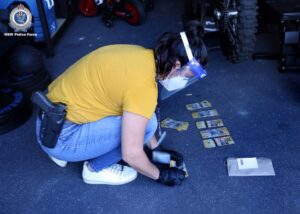 A Port Stephens home has been searched as a part of investigations into outlaw motorcycle gang activity in the Hunter and across Sydney.

In May last year Strike Force Gildi was formed by detectives from the NSW Police Force’s Criminal Groups Squad and Australian Federal Police – as part of the National Anti-Gangs Squad (NAGS) – to investigate the criminal activities of associates of the Comancheros gang.

Investigators executed four search warrants yesterday at Boat Harbour in Port Stephens, as well as at Baulkham Hills, and at a Flemington business.

During the searches, police seized documents, electronic items, a set of handcuffs, OMCG paraphernalia – including a diamond encrusted gold ring – and other items relevant to ongoing investigations.

Criminal Groups Squad Commander, Detective Superintendent Grant Taylor, said investigators continue to clamp down on individuals who facilitate, associate, or help those responsible for the illicit activities of outlaw motorcycle gangs and other criminal networks.

“Often these businesses incorporate family members or close associates of those involved in the illicit activities, which was the purpose of these search warrants in this instance.”

“These people can expect to be watched – and we will continue to disrupt their activities and scrutinise their financial circumstances, so any illegitimate business interests are stopped,” Det Supt Taylor said.