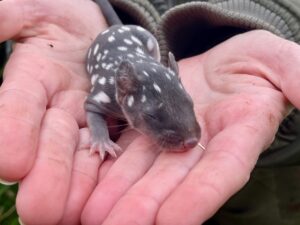 Conservation organisation Aussie Ark are celebrating the birth of the joeys in their breeding program that has bred over 150 Eastern Quolls since 2017 – it’s the first time in over 60 years that the species has been on mainland Australia.

Last year they had some born and bred in their Barrington Wildlife Sanctuary which was another huge win for Aussie Ark.

Pouch checks confirmed the joeys range between 1 and 3 months of age.

“It’s an exciting time of year for the whole team when we do the Eastern quoll pouch check. These creatures are so important, and they fall into a really unique niche in the ecosystem,” Aussie Ark Manager of Conservation, Hayley Shute.

“Getting to see them so tiny, inside mums’ pouch is like nothing else. They’re so vulnerable at this age, it’s a special feeling knowing we are playing such an important role in their survival as a species,” she said. 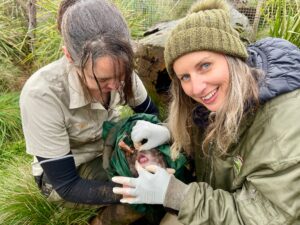 Eastern quolls were once common throughout Australia, but sadly became extinct some 60 years ago.

The cause of their mainland extinction is due to introduced feral pests such as cats and foxes, as well as poisoning and trapping.  Across Tasmania, quoll numbers have declined by more than 50% in the 10 years to 2009 and are showing no sign of recovery. It’s estimated approximately 10,000 are left in Tasmania, but numbers have fallen rapidly with Eastern quolls edging closer to extinction.

The success of the Eastern quoll program at Aussie Ark is only possible thanks to the ongoing support of Aussie Ark partners including Re:wild, Australian Reptile Park, Australian Geographic, WIRES, Glencore and the Foundation for Australia’s Most Endangered Species.

You can help Aussie Ark’s mission of saving endangered native wildlife from extinction by ‘adopting’ an Eastern quoll for as little as $25 a month. Head to Aussieark.org.au/adopt to find out more.