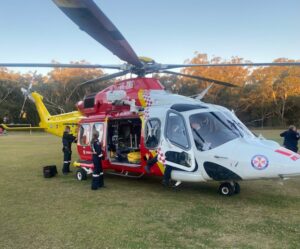 A woman has been flown to hospital for burns treatment following an incident at Salamander Bay.

The Westpac Rescue Helicopter was called to the scene yesterday afternoon — and arrived to find the 48 year old had sustained burns to her face.

The woman was stabilised by paramedics before being airlifted to Sydney’s Royal North Shore Hospital.

It’s not known how the woman sustained the injuries.

She was last reported to be in a serious but stable condition.