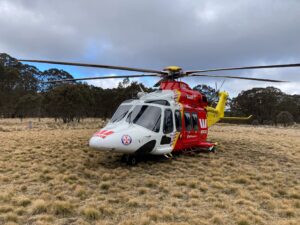 Two teens have been injured in an accident near the Barrington Tops.

Emergency services were called to Moonan Brook east of Scone just before 1:30pm yesterday following reports of a single vehicle rollover with four people on board.

They were all stabilised at the scene by NSW Ambulance Paramedics – a 13-year-old boy and a 16-year-old female were flown to the John Hunter Hospital by the Westpac Rescue Helicopter Service with possible hip and pelvic injuries.

The injuries of all four people were non-life threatening.

All were last reported to be in a stable condition.

There were cars a plenty at the Barrington Tops over the weekend with a light dusting of snow on Saturday night.