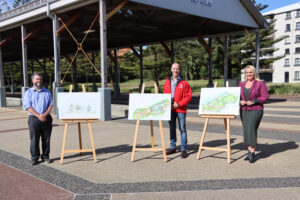 City of Newcastle has updated the vision for Newcastle’s Harbour Foreshore after community feedback.

The revised concept for Foreshore Park has an additional 4,000 m2 of playspace with more picnic areas, trees and gardens, cycleways and new plans for the Wharf Road precinct.

Community consultation has been underway since mid-2020 after the Masterplan project was released for tender at the end of 2019. Locals have had the opportunity to share what they love about the foreshore, a Community Reference Group was formed and there has been a number of stakeholder meetings and community engagement with the most recent on July 22 this year to reveal the latest plan.

Council said the updated concept includes increasing the size of the fenced regional-level accessible and inclusive playground, a significant waterplay space, a cultural heritage walk that links back to Newcastle’s Indigenous heritage, and improvements along Wharf Road and Tug Berth Lane. Tree planting is planned throughout the inclusive playspace and the concept plan proposes a formal tree grove, which will link the two event spaces, The Grove and The Commons. Additional planting of an avenue of trees is proposed along Wharf Road.

“This project is a great example of City of Newcastle working with our community to deliver its first regional-level recreational park and flexible open space that meets the needs and wants of those who will use Foreshore Park into the future,” Cr Nelmes said. 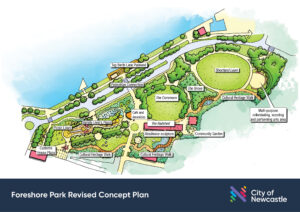 “Our community provided valuable feedback which has helped shape the revised plans for Foreshore Park and I’d like to thank everyone who provided input, particularly our Community Reference Group members.

“In direct response to the community’s feedback, revisions to the concept for Foreshore Park include the relocation of the inclusive ‘Variety Livvi’s Place’ playspace and adjoining amenities, and provision for a multi-purpose rollerskating, scooting and performing arts area.

“We’ve also developed a concept plan to turn the Wharf Road Precinct into a world-class harbourside esplanade. We are doing this by improving the Joy Cummings promenade, parklands, connecting pathways and cycling infrastructure, improving access to the area, and creating new opportunities for our community and visitors to make the most of the magnificent waterfront location.”

Newcastle Councillor John Mackenzie said he is looking forward to seeing this project progress, delivering new facilities and retaining existing features such as the Sandhills Community Garden in its current location.

“We’ll continue to work with the Community Reference Group to fine tune the concept designs ahead of the development of the draft masterplan for the site, which will be placed on public exhibition for broad community feedback later this year,” Cr Mackenzie said.

A key aspect of the concept design is the inclusive ‘Variety Livvi’s Place’ playspace which is being delivered in partnership with Variety the Children’s Charity and was bolstered by a $500,000 contribution from the Newcastle Port Community Contribution Fund, along with $300,000 from the NSW Government’s Everyone Can Play grant program. Variety – the Children’s Charity NSW/ACT Head of Inclusive Play, Kim Becherand, said redevelopments for passive recreation and play like Foreshore Park are fundamental in creating inclusive communities across Australia.

“At Variety we believe that all kids deserve to experience the joy and benefits of play. Working together with the kids, families and community of Newcastle we have created a bespoke playspace that pushes the boundaries of what an inclusive playspace can be. A space with endless opportunities to connect, explore and play, where difference doesn’t matter and everyone is included, valued and feels they belong.”