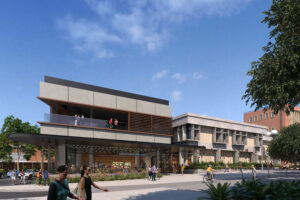 The proposed plan to expand Newcastle Art Gallery looks like it’ll get the green light.

Historically low interest rates could make the $35.6 million project possible with a financial report concluding a fixed interest rate of less than 1% with state treasury presents a pathway for it to be done.

Newcastle Lord Mayor Nuatali Nelmes said it’s a project that has been discussed for 16 years.

“An expansion of the Gallery has been discussed for 16 years with more than $10 million raised by the community to support the project. I’m pleased to say that City of Newcastle staff have identified a funding pathway to more than double the size of this wonderful community asset and make our shared dream a reality,” she said.

Significant funds are being held in trust with the Newcastle Art Gallery Foundation Board for the specific purpose of expanding the Art Gallery, including that $10 million bequest from Valerie Ryan, a commitment to additional community fundraising of $2.5 million and $500,000 from the Margaret Olley Art Trust.

City of Newcastle has also committed to contributing $16.2 million towards the project (including the $3.6 million already invested) following a unanimous resolution of Council in February this year. and the project was included in the NSW Government’s Cultural Infrastructure Plan 2025, which identified the redevelopment of the Art Gallery precinct as a ‘regional opportunity’.

“With the current favourable economic conditions, including historically low interest rates, the time has come for City of Newcastle to make this project happen.”

Cr Nelmes said a number of options including using cash reserves, external loans or a combination of both, have been evaluated in the report to Council, with a recommendation to borrow up to $22.6 million via a fixed interest rate loan of 0.88% over 10 years to fund the balance required for the expansion project.

Council said the various options were compared on their Net Present Value (NPV), with estimates showing that borrowing up to $22.6 million over 10 years at all-time low interest rates far outweighs the benefits of using our own cash.

“City of Newcastle is committed to the Newcastle Art Gallery continuing to be a symbol of excellence and source of pride as a major cultural asset for our state, which is home to a nationally significant collection that includes more than 7,000 works valued at $115 million,” Cr Nelmes said.

The financial report recommends the preferred funding option is to borrow up to $22.6 million over a 10-year fixed rate term from NSW Treasury Corporation, which is the central borrowing authority for the New South Wales public sector.

City of Newcastle has already approved a development application for the project, which includes upgrading and expanding the Gallery to provide modern facilities such as a new café and retail shop, multi-purpose and educational program space, improved display and secure international standard loading dock.

An additional 1,600 square meters of exhibition space will include dedicated areas for the Gallery’s collection on the lower level, while the upper level will cater for a variety of travelling exhibitions, including international shows.

A tender report will be submitted to Council later this year seeking approval to award a construction contract.