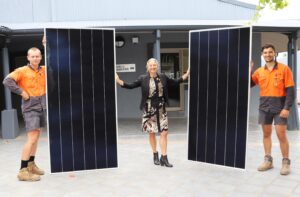 Cessnock City Council are officially running on the power of the sun from this week.

Council has been installing 252 panels across their highest energy consuming sites since February including at the Hunter Valley Visitor Information, Cessnock Library and Council’s Administration Building.

“In 2015 Council established the Revolving Energy Fund. The purpose of this fund was to establish an internal loan system for investing in energy efficiency. All savings made from investments are returned to the fund and can be re-invested into the next energy saving projects.”

“It’s a great cost saving for Council with it estimated to save $12,000 per year on Council’s electricity bill for the Administration Building and all systems will be paid off from savings in 5.5 years.”

Council said through the fund they’ve been able to do some great projects like replace fluorescent lights with LEDs across many of their sites including the Works Depot, the Hunter Valley Visitor Information Centre, Cessnock Aerodrome, Cessnock Performing Arts Centre and Cessnock City Library.

Since the installation of the LED lights in the administration building Council said their monthly electricity bill has reduced by about $1,000. Those savings have been put straight back into the fund.

Council will have covered the cost of the installation in three years if this rate of saving continues.

Both community and staff can view the output of the solar panels and get an idea of how much energy the panels generate with screens installed in public locations displaying this information.

Council aren’t done yet, they plan to install more solar panels on the Cessnock Performing Arts Centre and Kurri Kurri Library using the next savings of the Revolving Energy Fund.