The Newcastle Independents have launched their Council election campaign.

Ward 1 incumbent Cr John Church announced he will be putting his hand up for the Lord Mayoral race to take current Lord Mayor Nuatali Nelmes position, as well as running in Ward 1.

“It’s an honour to be standing for Lord Mayor of Newcastle,” Councillor Church said at the launch yesterday.

“I am passionate about the city and its future and want to make this the greatest place to live, work and play.”

“For too long, the people of this city have come second to self-interest and party politics, and I know we can do better for the city.”

“The Newcastle Independents want to take politics out of local government and make sure the only agenda is giving residents a voice in every decision.”

“We want to change the focus of this big taxing council and address urgent and overdue capital works like cycleways, inland pools, sporting amenities and footpaths.”

“It is time to get back to basics and deliver what ratepayers expect from their council.”

“I’m not going to tell them how to vote, but let me say this if you want more of the same feel free to vote for Nuatali Nelmes, but if you want change the Independents are the only alternative right now,” said Councillor Church. 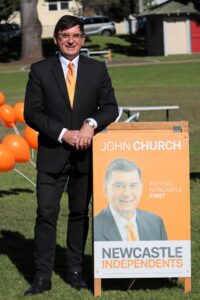 Running with Councillor Church will be former councillor Scott Sharpe and lifelong Newcastle resident and lawyer, Sally Davies on the Ward 1 ticket.

Allan Robinson will re-contest Ward 4 for a third time, alongside Brent Niszczot. The third candidate on the Ward 4 ticket will be announced in the coming weeks.

Labor has criticised the team, saying they are “Liberals in disguise” which Councillor Church said is ridiculous.

“That’s absolute nonsense, I haven’t been a member of the Liberal party for years, the rest of our ticket are completely Independent and let me say this, the words that were used by Labor politicians yesterday just hours after us announcing our ticket were terrible. They claimed that we had a shallow gene pool, I mean when you unpack that, that is really nasty language and to think on day one they’ve stooped to such gutter politics is exactly what we’re campaigning against.”

he 2021 Local Government Election will be held on Saturday September 4, with early voting starting on 23 August.