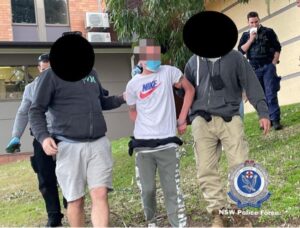 A wanted man has been arrested after attempting to evade police at Mayfield yesterday.

Police received information the 21-year-old was in the vicinity of Fawcett Street in Mayfield at about 4pm.

It’s alleged the man knocked on a resident’s door and when it opened he forced his way inside, before running through the house and into the backyard to avoid plain clothes police who were patrolling the area.

In a joint operation between Newcastle City & Lake Macquarie Proactive Crime Teams who also had assistance from Police from Northern Region, the male was located attempting to flee the area after hailing a taxi.

A short time later Police stopped the taxi on Crebert Street where the male then fled, running through several yards and premises.
Police gave chase and the man was eventually arrested without incident.
Police searched him and found he was in possession of two knives.
The Gateshead man was taken to Newcastle Police Station where he was charged with the five outstanding warrants, custody of a knife in a public place and two counts of enter inclosed land without lawful excuse.
He was refused bail by police and will appear at Newcastle Local Court today.
Image credit: Newcastle City Police District Facebook page
X
X