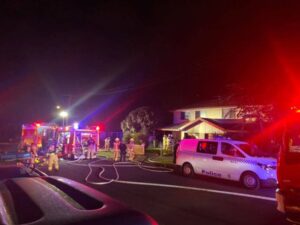 Fire crews have saved a unit complex in Wallsend from going up in flames.

Emergency services including Wallsend Fire Station and five crews from Lambton Fire Station & Mayfield West were called to an address in Stapleton Street in Wallsend at about 9:30pm following multiple 000 calls of a house fire.

When crews arrived, they found the fire was coming from within the garage of the two story dwelling.

A power saw was used to cut through the garage door to gain better access to the fire and a short time later it was extinguished.
All occupants were reported safe and accounted for.
Fire crews said it serves as a reminder to everyone to make sure you have a working smoke alarm, move everything a metre away from the heater, clean your lint filter in your dryer and check you have no overloaded power boards.
Image credit: Fire and Rescue NSW Station Wallsend Facebook page
X
X