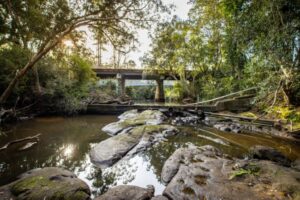 After several delays, finally the Freemans Drive Bridge at Cooranbong will be getting a makeover.

It’s a $1.3 million project to get the Lake Macquarie bridge up to standard and work is already underway.

The improvement works involve strengthening the superstructure and deck of the bridge, which support the roadway, to increase the load capacity of the bridge and ensure longevity of the structure.

Lake Macquarie City Council’s Asset Manager Helen Plummer said safety is the number one priority for Council and regular inspections are carried out to ensure bridges across the city remain safe at all times.

“The upgrade is a necessary step that needs to be taken now to improve safety for the 8000 motorists that cross the bridge every day, including heavy vehicles,” Ms Plummer said.

“Following an inspection in late 2019, temporary traffic arrangements, including single-lane traffic and a temporary speed limit of 40km/h, have been in place on the bridge to allow it to remain open to the majority of vehicles.”

“The design and delivery of the strengthening works was more complex than we initially anticipated, resulting in some initial delays to the project. I am pleased to see the works are now underway.”

Helen Plummer has thanked the community for their ongoing patience throughout the project.

The works are expected to take three months to complete, weather and construction conditions pending.

The project is jointly funded by the Australian Government’s Bridges Renewal Program and Council.

Liberal Patron Senator for the Hunter Region, Hollie Hughes said the Bridges Renewal Program is an Australian Government initiative to fund the upgrade and replacement of bridges to enhance access for local communities and facilitate higher productivity vehicle access.