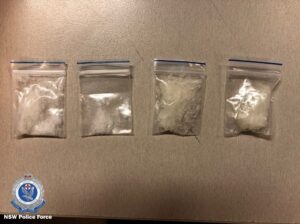 A man’s set to face court today, after an alleged drug bust in Raymond Terrace over the weekend.

Police tried to speak with the 23-year-old man on Parkway Avenue at about 10:45pm Saturday, but he ran off.

He allegedly tossed a bag onto a residential property as he fled the scene, but officers recovered the bag and arrested the man following a brief pursuit.

Inside the bag, they reportedly found 100 grams of methylamphetamine, 80 grams of an unknown white powder, prescription medication and $32,840 in cash.

They’re all being forensically examined.

The man was arrested and charged with multiple counts of drug supply.