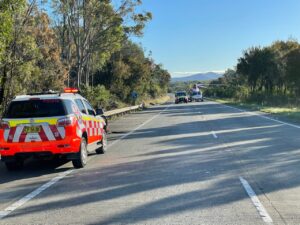 Two men have been injured, after a multi-vehicle crash on the M1 Pacific Motorway near Morisset this morning.

Emergency services were called to the scene near Newport Road just after 7:45am, where they had to extricate a male in his 60s from one vehicle.

He was treated for head and chest injuries, before the Westpac Rescue Helicopter airlifted him to the John Hunter in a serious condition.

A second man was also treated on scene, and taken to hospital by road with minor injuries.

All northbound lanes remain closed in the area, but drivers can take the Mandalong Road exit at Morisset before rejoining the motorway on Palmers Road.