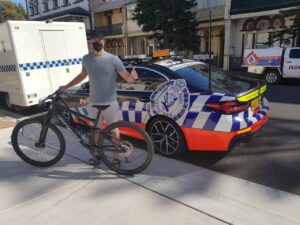 Police have managed to track down the owner of a bicycle that was stolen in Newcastle.

At about 7:30am on September 21st, police were patrolling around Gordon Avenue at Hamilton when they stopped a silver Subaru Liberty station wagon.

They noticed some defects including several cracks across the front windscreen and inoperable brake lights.

Police spoke to the 34-year-old male driver before inspecting the vehicle. Officers noticed a new ‘Specialized’ Evo men’s Mountain Bicycle valued at around $5000 laying across the rear seats and boot area of the car.

When asked about it, the driver said they purchased the bike off Facebook marketplace, but they couldn’t provide proof of the sale or a conversation about the sale on Facebook Marketplace.

Police took the bicycle out of the car so they could enquire using the bike’s serial number which is how police ascertained that it had been stolen from a Lambton Address in July.

The bicycle was seized by Police and the owner contacted who attended Newcastle Police Station shortly afterwards to collect it.
The male who was in possession of the bicycle was issued with a Court Attendance Notice to appear at Newcastle Local Court for the offence of goods in custody suspected of being stolen.
Image credit: Traffic and Highway Patrol Command Facebook page
X
X