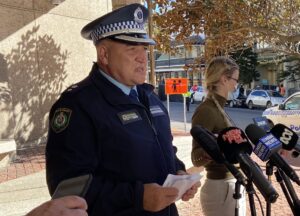 A woman has been threatened and assaulted in a home at Newcastle.

Police say at about 3:20pm yesterday, 29 July, a 20-year-old woman was inside her bedroom on Turana Parade at North Lambton when a man entered the room armed with a knife and threatened her.

She attempted to alert neighbours before the man grabbed her and sexually assaulted her.

A short time later, the man fled on foot.

The woman was then able to get assistance from other residents, who contacted police.

Detectives have commenced an investigation under Strike Force Oorin, with assistance from the State Crime Command’s Child Abuse and Sex Crimes Squad.

The man is described as being of Caucasian appearance, aged in his early to mid-20s, of a solid and athletic build, with a broad nose, short black hair and unshaven.

As investigations continue, police are urging anyone who may have CCTV or dashcam footage from Turana Parade, Lester Parade, Faulkner Crescent, Sunset Boulevard and University Drive between 1pm and 5pm yesterday (Thursday 29 July 2021) or who may have information which could assist investigators to contact Newcastle Police or Crime Stoppers on 1800 333 000