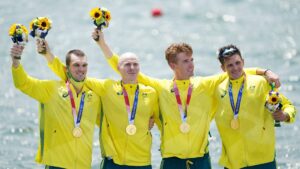 The 29-year-old lined up with rowing teammates Alex Hill, Jack Hargreaves and Alex Purnell yesterday and won gold ahead of Romania and Italy in the Australian Men’s Fours.

Mayor of Dungog Shire, Councillor John Connors, has joined the nation in congratulating Dungog’s own for putting in an ‘oarsome’ performance.

Mayor Connors says the Dungog community is thrilled to celebrate the victory of one of its own.

“As a proud and patriotic community, Dungog Shire is exceptionally pleased to be celebrating a gold medal win for Spencer Turrin and his teammates today,” says Mayor Connors.

“Since growing up in Dungog, Spencer has enjoyed many accolades and achievements on the international rowing circuit, as well as being named Dungog Shire Sportsperson of the Year in 2016, and we are proud of his ongoing success.”

“On behalf of the Dungog community, I pass on heartfelt congratulations to Spencer, his teammates and his family on realising this Olympic dream, and want him to know he has brought much joy and pride to our entire region, as well as the rest of the nation.”

Australia hasn’t won gold in this event for 25 years, when the original Oarsome Foursome claimed the title for a second time in 1996.

The Australian Women’s Fours rowing team also won their race by a mere 0.34 seconds ahead of the Dutch, making it a double Olympic victory for Australia’s rowing champions.