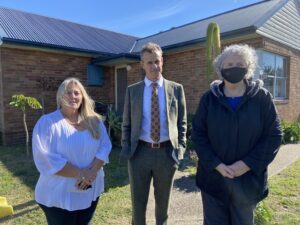 Labor has accused the NSW Government of deliberately running down housing to sell it off.

Newcastle MP Tim Crakanthorp believes the NSW Government has deliberately run down social housing in Stockton, not just on this occasion, but many times before, in order to “flog them off”.

A corner block at Stockton has been Tammy Smith’s home for the last 25 years, Tammy has raised her five children in the home and it’s been a life saver for them all.

But now it’s up for sale, even though the ball was already in motion to get the repairs needed at the home done.

Tim Crakanthorp said he received a call from Tammy after she was told the house would be sold, not repaired.

“The way this government treats its housing and its tenants is an absolute disgrace. We have people who are absolutely desperate to move into housing. We’ve got tenants here who have been trying to get their places fixed for many many years.”

“We’ve got Tammy who has been waiting four year to get her place fixed and they’ve actually committed to fixing it but now they’ve sent her correspondence and said nope, we’re going to sell it to the highest bidder,” said Tim.

“We’ve been in touch with the Minister to say well what is going on here, you’re selling properties off and you’re not rebuilding social housing here.”

Tammy has no idea where she’ll be living if she can’t get the Government’s decision reversed, and she can’t even think about what it will feel like to leave her home.

Leaving Stockton won’t be easy emotionally or health-wise for Tammy, she suffers from poor health herself, and her son who lives with her now has autism.

“I’ve been here for nearly 25 years, I’ve raised my five children here and my son and I live here now and my son has autism and he needs stability and all of that sort of stuff and routine and our community is very good with him and it’s very hard to not know where you’re going to go,” said Tammy.

Tammy said the repairs would be able to be done with some work needed in the bathroom, on the bedroom wall where there’s mould and the paint is peeling away and some brickwork needs to be replaced out the front.

What makes it worse it that Tammy was told it would be fixed.

“Especially when I’ve already been told that my house was going to be fixed, it was all approved in April this year and then the other day I had a letter on my door to say otherwise.”

“This government’s treatment of social housing and their own tenants is nothing short of a disgrace.”