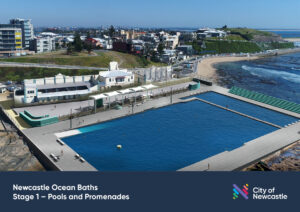 The final concept design for upgrade works at Newcastle Ocean Baths have now been revealed.

They include moving fit-for-purpose ramps to the western edge of the pool in a bid to improve accessibility for locals.

While the existing rounded central stairs will also be kept and incorporated into the new design, with upgraded seating set to be added.

It comes after the Hunter Regional Committee of the National Trust raised concerns the stairs were being left out from an earlier design.

“City of Newcastle has worked closely with National Trust on seeking advice as to how the stairs can be incorporated into the new design, as well as sharing additional information about the engineering and safety considerations, so we can get a better outcome for this cherished facility,” Co-chair Mark Metrikas said.

Other changes include replacing the shade structure with a rainproof shade textile which can be removed in winter, the colour scheme of the extended bleachers and reducing the visual impact of the new lifeguard tower.

Stage one of the project will begin later this year, with the pools and the promenades both set to be restored.