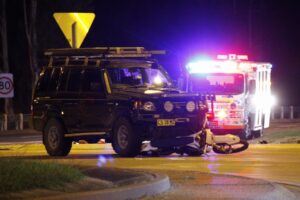 UPDATE: A police officer’s been rushed to hospital overnight, after he was hit by a trail bike at Maitland.

Police started pursuing the bike along the New England Highway at around 7pm, before the rider ran into a senior constable who was on foot near High Street.

The 36-year-old suffered a broken wrist, nose and an arm laceration.

He was airlifted to the John Hunter for treatment, where he remains this morning.

While the 19-year-old male rider was flung from the bike and suffered head, leg and pelvis injuries.

He was also taken to hospital.

An investigation is now underway, and initial inquiries have revealed the bike involved was unregistered.