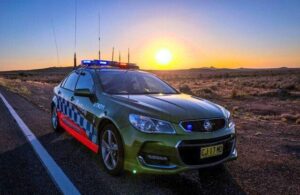 Two people are set to face court, over a high speed chase on the Central Coast last night.

Police started pursuing a Holden Commodore at about 11:40pm, after it failed to stop for an RBT at Wyong.

They chased the car through several suburbs with the help of PolAir, before the chase was terminated when the Commodore crossed to the wrong side of the road.

Officers picked up the chase again when they spotted the car at Warners Bay a short time later.

They were forced to use road spikes to bring it to a stop on Macquarie Drive, near the intersection of King Street.

The man’s been charged with police pursuit and dangerous driving to face Belmont Court today.

While the woman’s been charged over the pursuit and possession of a knife.